Germanium recycling and the record-breaking robot

Somewhere above you, NASA’s “Opportunity” rover continues its record-breaking journey across Mars. Landing in January 2004, the plucky robot has now travelled a total of 42.2 km, easily farther than any other wheeled vehicle on another world.

That achievement has only been possible due to high-efficiency Germanium solar cells, which have  powered Opportunity for over a decade.

With the European Space Agency now in the latter planning stages of its own robotic exploration of Mars, we want show the importance of EU metals recyclers ensuring a secure supply of Germanium.

That’s right,  the Rover’s solar cells are based on Germanium. You’re in good company if you haven’t heard of it – back when designing the periodic table, Dimitri Mendeleev had to leave a gap below Silicon and above Tin, with Germanium not being discovered for another two decades.

It's now used in a whole load of high technology applications – the fiber optical cable connecting your computer to the internet, LED lights, infra-red night vision systems, and of course, space photovoltaics.

It’s not just our courageous Mars Rover – in most satellites circulating the Earth, Germanium wafers are installed as a layer in PV solar panels, allowing them to derive electricity from sunlight and maintain activity.

Why Germanium? Well, whereas conventional technologies only convert 12-15% of their received sunlight into electricity, Germanium cells achieve up to 40% efficiency levels – something the US Department of Energy even claimed as a “World Record” back in 2006. 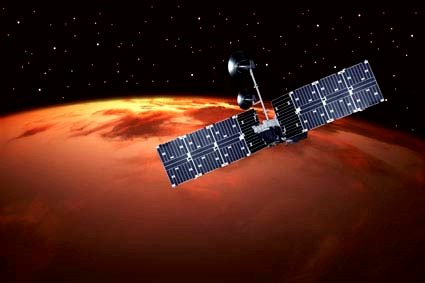 The EU’s recycling industry is key

Germanium’s story is not all rosy however. Along with 19 other raw materials, it has been classified as “critical” by the European Union.

What does that mean ? Well, Germanium’s high economic importance is linked with a high supply risk, meaning we need to take special care that we have sufficient access within Europe.

To quickly back that up with figures - in 2012, only 128 tonnes of Germanium were produced globally, with a massive 70% coming from China.

That’s why it's essential for Europe to recycle its germanium. Our industry is doing just that. For example, Belgian company Umicore is equipped with advanced processes to recover up to several tens of tonnes of Germanium per year; not only from end-of-life products, but also from industrial by-products and production scraps

20% of all Germanium now consumed globally is already from recycled sources, and this is expected to grow in the future to help cope with escalating demand in the high-technology applications mentioned above. Umicore is now looking for more recycling feeds, including complex and low-grade materials.

And as well as ensuring a securer supply, Germanium recycling has environmental benefits. A recent lifecycle assessment has found that secondary Germanium production from PV production scraps has 95% lower impacts across the majority of categories, compared with primary production.

What does this mean? By recycling Germanium in Europe,  we can secure a sustainable supply of a material necessary to spearhead our own voyages of discovery, to Mars and beyond.

And how important is that? Well, take a look at this highlight reel of Opportunity’s journey to date, and imagine what Europe’s own Mars Rover might be able to discover for itself.